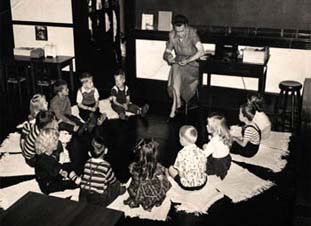 In 1935, a new faculty member moved to Appalachian State Teacher's College from Mississippi, Miss Lucy Brock. Miss Brock came to teach classes in Home Economics at the college. Classes in this area had been offered as electives since 1915. Miss Brock was to have a profound impact on this small community of Boone, NC and upon graduates in Home Economics.

Around 1940, three major events took place. A Department of Home Economics was established at the college to offer a B. S. degree and certification for teaching in Home Economics. Miss Brock became the first chairperson of the department, and the preschool laboratory program, later named in honor of Miss Brock was begun.

This preschool program was created with two objectives. The first was to offer the Home Economic Majors hands-on experiences of working with young children to enhance their knowledge of child development. The second objective was to give quality early experiences to the local children that would prepare them for public school.

The first Lucy Brock Laboratory Program was held in the Home Economics Building that stood on the present site of the Administration Building. This building housed classrooms, the preschool, apartments for home management students, Miss Brock's apartment, and a swimming pool for the children.

Development of the Program 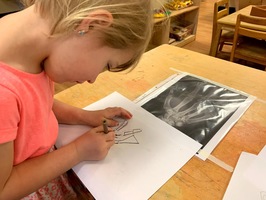 Over the years, many changes have been made to the program. In 1967, a new preschool building was built next door to the L. S. Dougherty Building. In 1984, the department took over the early childhood classroom in Sanford Hall, previously used by the College of Education. For 27 years, until 1994, Mrs. Joyce Stines directed Lucy Brock. Under her leadership the program achieved accreditation by the National Association for the Education of Young Children.

From 1994 until 2000, Dr. Ellen Carpenter directed the lab and the two classrooms were renamed Lucy Brock Upstairs and Lucy Brock Downstairs to emphasize the fact that both the half-day preschool and full-day child care programs served the objectives envisioned by Miss Brock--a cutting edge, hands-on learning environment for child development students and a high quality program for the young children of Watauga county.

In January, 2000, Lucy Brock Child Development Laboratory Program entered a new era. Under the direction of Dr. Patricia Hearron, the program expanded its schedule of operation as well as the age-ranges of children served. Lucy Brock Upstairs was

In 2010, LBCDLP again changed locations. The program is now currently located next to the Reich College of Education. The classrooms are no longer referred to as Lucy Brock Upstairs and Lucy Brock Downstairs, which reflects our new physical location. Instead, the rooms are referred to as the Infant/Toddler room and the Preschool room, which reflects the composition of each room.refurbished as an infant-toddler environment, while Lucy Brock Downstairs continued to serve children ages three through five. The program expanded to include children with disabilities or developmental delays. The classrooms of LBCDLP continue to explore the ideals and principles developed over the last half-century in the northern Italian town of Reggio Emilia, recognized world-wide as a model of excellence in early childhood education. 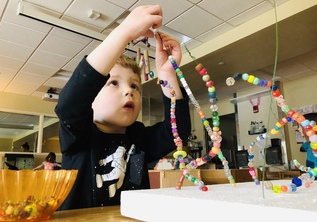 Creek Elementary School.  These additional classrooms provide both a valuable service for families and a great setting for training new professionals for careers in child development.  It fits perfectly with Lucy Brock's goal of applying and modeling best practices for child development in a real world setting.  The classrooms operate with the same daily schedule, school calendar, and curriculum as the NC Pre-K classrooms at Hardin Park, Green Valley, and Valle Crucis.

In recent years a transition in the administrative structure of LBCDLP has also occurred. The program currently has a full-time director, Andrea Anderson, and faculty are represented through the leadership of the Family & Child Studies department faculty. LBCDLP continues its mission to model currently evidence-based practices in the field of early childhood education, as well as to apply innovative approaches that will eventually contribute to new definitions of recommended practices.

During the 100th anniversary celebration of the University in 1999, the Lucy Brock Alumni Association was created. The Lucy Brock Alumni Association, created during this celebration, is comprised of the children who have been such an important part of our program as well as former and present faculty and child development students at the University. Alumni and friends of Lucy Brock Child Development Laboratory Program are invited to share reminiscences and photographs for inclusion in the programs historical archives.